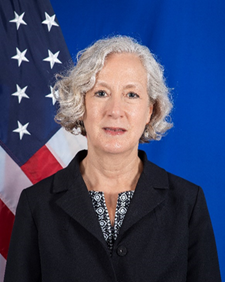 Ms. Linda Specht
Deputy Assistant Secretary, Acting
U.S. State Department
Serves as the lead negotiator for bilateral defense agreements that involve access, status protections, and burden sharing.
With more than 30 years’ experience in the Foreign Service, Linda has held key positions in political, political-military and economic affairs both at the State Department and in U.S. embassies and consulates around the world. She comes to PM from the U.S. Naval War College where she served as the State Department’s senior faculty advisor and as an instructor in the National Security Affairs department. Prior to War College, Linda served as Foreign Policy Advisor (POLAD) to the Commander of the U.S. Strategic Command and Acting POLAD to U.S. Space Command. Previously, she served as U.S. Consul in Adana, Turkey, had leadership roles in offices responsible for U.S. economic sanctions, Pakistan and Arabian Peninsula, and embedded with U.S. and coalition forces in Iraq and Afghanistan.
Linda has a M.A. in National Security and Strategic Studies from the National War College, a M.A. in Law and Diplomacy from the Fletcher School, and a B.A. from Trinity College, Dublin.
Close