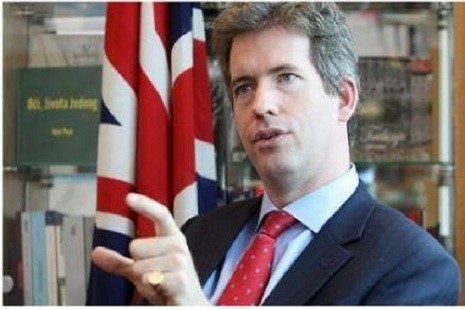 Mr. Ed Ferguson
Minister Counsellor Defence
British Embassy
Edward Ferguson took over as Minister Counsellor Defence at the British Embassy in Washington DC in September 2018. Together with the Defence Attaché, he led the British Defence Staff (United States), a network of 1,000 people spread across 28 States. As the UK’s senior policy adviser on defence relations with the United States, he was responsible for UK-US collaboration on strategic planning, nuclear policy and programmes, trade and acquisition, and science and technology. He was the US Network’s lead on HMG’s Integrated Review and AUKUS, and the senior champion for the Race, Ethnic and Cultural Heritage Group.
Previously, he served as Her Majesty’s Ambassador to Bosnia and Herzegovina from 2014 to 2018, where he created and led a new international strategy, co-launched by the British and German Foreign Ministers, that re-energised Euro-Atlantic integration after years of stagnation while stimulating economic growth and reducing high levels of youth unemployment.
A former Exhibitioner and Choral Scholar of Trinity College, Oxford, where he was also Treasurer of the Oxford Union, Edward graduated with First Class Honours in Classics in 2001. Joining the Graduate Fast Stream of the Ministry of Defence, he started out in the Naval Staff before joining the Iraq Secretariat during the build-up to and subsequent execution of Operation TELIC. In 2003, he was involved in financial and requirement scrutiny of the Department’s future helicopter procurement programme.
From 2004 to 2006, he managed a national award-winning £300-million programme to consolidate the MOD estate in Greater London and to redevelop RAF Northolt. In 2006, he volunteered for an operational tour, serving as Political Advisor to a British Battlegroup in Maysaan Province, Iraq (while his brother was a troop leader with the British Army in Basra). On his return, he took on responsibility for the strategic management of the UK’s bilateral defence relations with the United States, Canada and Western Europe.
From 2007 to 2009, he worked as Private Secretary to three Defence Secretaries, acting as their closest adviser on issues relating to operations in Iraq, the £6-billion defence equipment programme, science & technology, counter-terrorism and counter-piracy.
In 2009, he was appointed the Head of Afghanistan and Pakistan Policy, responsible for advice to the National Security Council on the policy, financial, legal, parliamentary and presentational aspects of the UK military contribution to operations in Afghanistan, and on the long-term defence role and interests in Pakistan.
From 2011 to 2014, he was Head of Defence Strategy and Priorities, leading two teams, one responsible for leading the MOD’s contribution to developing the 2015 National Security Strategy and the Strategic Defence and Security Review, and the other for prioritising the MOD’s international defence engagement activities. In 2013, he graduated from the London School of Economics and Political Science with an MSc with Distinction in Strategy and Diplomacy. He has been a member of the RCDS Strategic Advisory Panel, a member of the US Air Force Grand Strategy Advisory Board, and is a graduate of the PINNACLE Command and Staff course.
Close